Traditional African religions or the traditional beliefs and customs of Africans are  very diverse set of beliefs, including various ethnic religions. Typically, these traditions are oral, not biblical, and are passed down from generation to generation through folk tales, songs and festivals.

Including belief in a number of higher and lower gods, sometime including a supreme creator or powers, belief in spirits, veneration of the dead, the use of magic and traditional African medicine. Most traditional African religions can be characterized as animistic, with various polytheistic and pantheistic aspects, the role of humanity is commonly seen as harmonizing nature with the supernatural.

Some aspects of traditional African religions:

Igbo witch doctor in early 20th century in Nigeria, West Africa, adherents of traditional religions in sub-Saharan Africa are spread across 43 countries and are estimated to number over 100 million, traditional African religions today are adherents of Christianity or Islam; Africans often combine the practice of their traditional beliefs with the practice of the Abrahamic religions, the two Abrahamic religions are widespread in Africa, although they are mainly concentrated in different regions. They have replaced indigenous traditional African religions, but are often adapted to African cultural contexts and belief systems.

The basics of traditional African religions

Animism forms the core concept of traditional African religions, which include patron deity worship, nature worship, ancestor worship, and belief in the afterlife. While some religions have adopted a pantheistic worldview, most adhere to a polytheistic system with various gods, spirits and other supernatural beings. Elements of fetishism, shamanism and veneration of relics are also present in traditional African religions.

Traditional African religions can be divided into linguistic cultural groups with common themes. Among Niger-Congolese speakers, there is a belief in a creator god, force or supreme deity, which some believe is a widespread and ancient trait of Niger-Congo cultures, along with other more specialized deities, ancestral spirits, territorial spirits and beings, as well as evil caused by the evil will of man and neglect of ancestral spirits, and priests of territorial spirits, new world religions such as Santeria, Vodoun and Candomblé will come from this world. Among the speakers of the Nilo-Saharan language there is a belief in Divinity; evil is caused by divine judgment and retribution; prophets as mediators between God and man.

Among Afro-Asiatic speakers, there is henotheism, belief in their own gods, but recognition of the existence of other gods; evil is here created by evil spirits. The Semitic Abrahamic religion of Judaism is comparable to the latter worldview. The San religion is generally non-theistic, but a belief in the Spirit or Power of existence that can be used in a trance dance; trans healers.

Some scholars, including the historical ethnolinguist Christopher Ehret, suggest that certain traditional African religions monotheistic concepts, such as belief in a creator god or powers (alongside other gods, deities, and spirits), are ancient and indigenous peoples of the Niger-Congo ethnolinguistic family (from most of West and Central Africa) and date back to the beginning of their history in a form significantly different from the monotheism found in the Abrahamic religions. The traditional religion of Niger-Congo also included elements of polytheism and animism. 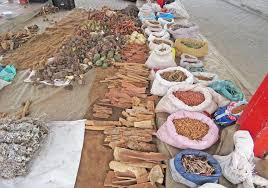 Traditional African medicine is also directly related to traditional African religions. According to Clemmont E. Vontress, the various religious traditions of Africa are united by basic animism. According to him, belief in spirits and ancestors is an essential element of African religions. The gods were created by themselves or descended from spirits or ancestors who were worshiped by people. He also notes that most modern African folk religions were under a strong region of non-African religions, mainly Christianity and Islam, and therefore may differ from ancient forms.

Jacob Olupona, an American Nigerian professor of indigenous African religions at Harvard University, characterized many traditional African religions as complex animistic religious traditions and beliefs of the African people prior to the Christian and Islamic “colonization” of Africa. Ancestor worship has always played a “significant” role in traditional African religions and cultures can be considered a central element of the African worldview. Ancestors (ghosts /ancestor spirits) are an integral part of reality. It is generally accepted that the ancestors lived in the kingdom of the ancestors (the world of spirits, while some believe that the ancestors became equal in power to the deities.

The line between deities and ancestors is often contested, but it is generally believed that ancestors occupy a higher level of existence than living humans and are believed to bestow either blessings or disease on their living descendants. Ancestors can advise and bestow good luck and honor on their living dependents, but they can also make demands, such as demanding that their shrines be maintained and propitiated. Belief in ancestors also testifies to the all-encompassing nature of traditional African spirituality, arguing that deceased ancestors still play a role in the lives of their living descendants.

Olupona rejects the Western / Islamic definition of monotheism or polytheism and says that such concepts cannot reflect complex African traditions and are simplistic. While some traditions have a supreme being (alongside other deities), others do not. Monotheism does not reflect the many ways in which traditional African religions spirituality understood deities, gods, and spirit beings. He summarizes that traditional African religions are not only religions, but also a worldview, a way of life.

Ceremony according to Traditional African religions

Traditional African religions practices of West and Central Africa usually manifest in community ceremonies or divination rites in which members of the community, conquered by force (or ashe, nyama, etc.), are Excited to a state of meditative trance in response to rhythmic or drumming or chanting. One religious ceremony practiced in Gabon and Cameroon is the okuyi, which is practiced by several Bantu ethnic groups. In this state, depending on the region, drum or instrumental rhythms performed by respected musicians (each unique to a given deity or ancestor), participants embody a deity or ancestor, energy or state of mind by performing various ritual movements or dances. Which further enhance their sublime consciousness.

When this trance-like state is witnessed and understood, adherents are able to contemplate the pure or symbolic embodiment of a particular mindset or frame of reference. This develops the skills to separate the feelings caused by this thinking from their situational manifestations in everyday life. This separation and subsequent contemplation of nature and sources of pure energy or feelings helps participants to manage and accept them as they arise in mundane contexts. This promotes better control and transformation of these energies into positive, culturally acceptable behavior, thoughts and speech. In addition, this practice can also encourage those in this trance to utter words that, when interpreted by a culturally educated initiate or diviner, can provide insight into the appropriate directions that the community (or individual) can take to achieve its goal. 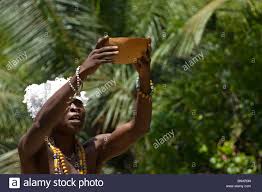 Traditional African religions have more similarities than differences, deities and spirits are worshiped by libation or sacrifice (animals, vegetables, cooked food, flowers, semi-precious stones and precious metals). The believer seeks the will of gods or spirits also through consultations with deities or fortune-telling. Traditional African religions encompass natural phenomena – the ebb and flow, the waxing and waning moon, rain and drought – as well as the rhythmic nature of agriculture. According to Gottlieb and Mbiti:

The environment and nature permeates all aspects of traditional African religions and cultures. This is largely due to the fact that cosmology and beliefs are inextricably linked with natural phenomena and the environment. All aspects of weather, thunder, lightning, rain, day, moon, sun, stars, and so on can be controlled by the cosmology of African peoples. Natural phenomena are responsible for providing people with their daily needs.

For example, in the Serer religion, one of the most sacred stars in space is called Yunir (Star of Sirius). With a long tradition of farming, the high priests and priestesses of Serer (Saltig) preach annually at the Xui Ceremony (divination ceremony) in Fatik before the Junir phase to predict the winter months and give farmers the opportunity to plant.

Since Africa is a large continent with many ethnic groups and cultures, there is no single divination technique. The casting practice can be performed with small objects such as bones, cowrie shells, stones, strips of leather, or flat pieces of wood.

Some metal castings are made of wood or on the ground (usually in a circle) using divine magic.

In traditional African religions, many people regularly look for diviners. There are usually no restrictions on this practice. The diviner (also known as a priest) is also sought after for their wisdom as counselors in life and for their knowledge of herbal medicine.

Since Africa is a large continent with many ethnic groups and cultures, there is no single divination technique. The casting practice can be performed with small objects such as bones, cowrie shells, stones, strips of leather, or flat pieces of wood. 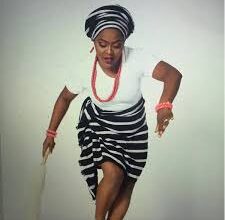 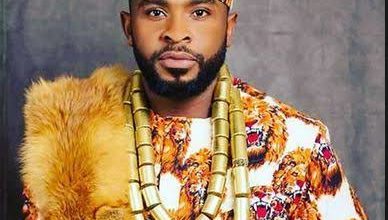 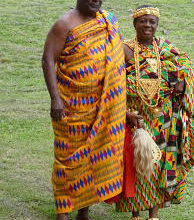